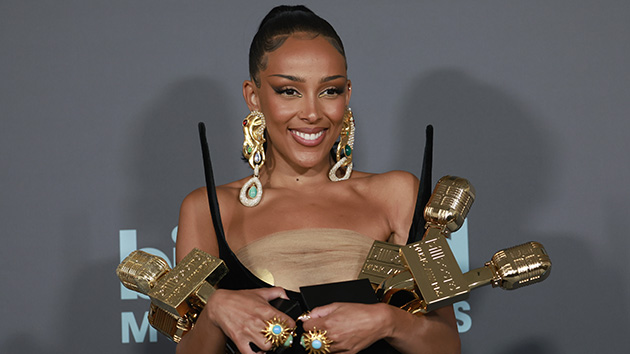 Doja Cat was a big winner at Sunday night’s Billboard Music Awards and — just as she had done at the 2022 Grammy Awards — created another meme-able moment.

During the Grammys, Doja brought the laughs when she admitted on stage she completed a lightning-fast bathroom trip when accepting Pop Duo/Group Performance for “Kiss Me More.” On Sunday, the singer was caught on camera pounding her drink before collecting her second BBMA trophy of the night.

Doja admitted to Entertainment Tonight that she guzzled her cocktail and puffed on her vape before climbing on stage because she had no idea she was going to win Top R&B Album. The singer also admitted she wasn’t exactly paying that much attention to what was going on.

That creates a challenge for Doja because when she is thrown a curveball her mind goes blank. “So I was shocked and I ran up,” she said about accepting her award. “And I was like, ‘I need something.’ Because I felt like my first speech was flat, a little bit? I don’t know.”

Looking back at her impromptu pre-acceptance speech ritual, she decreed, “It was great. It was amazing.”

Doja also revealed she has “learned from my mistake” and doesn’t go to the bathroom when her category is coming up — thanks to the Grammy Awards.